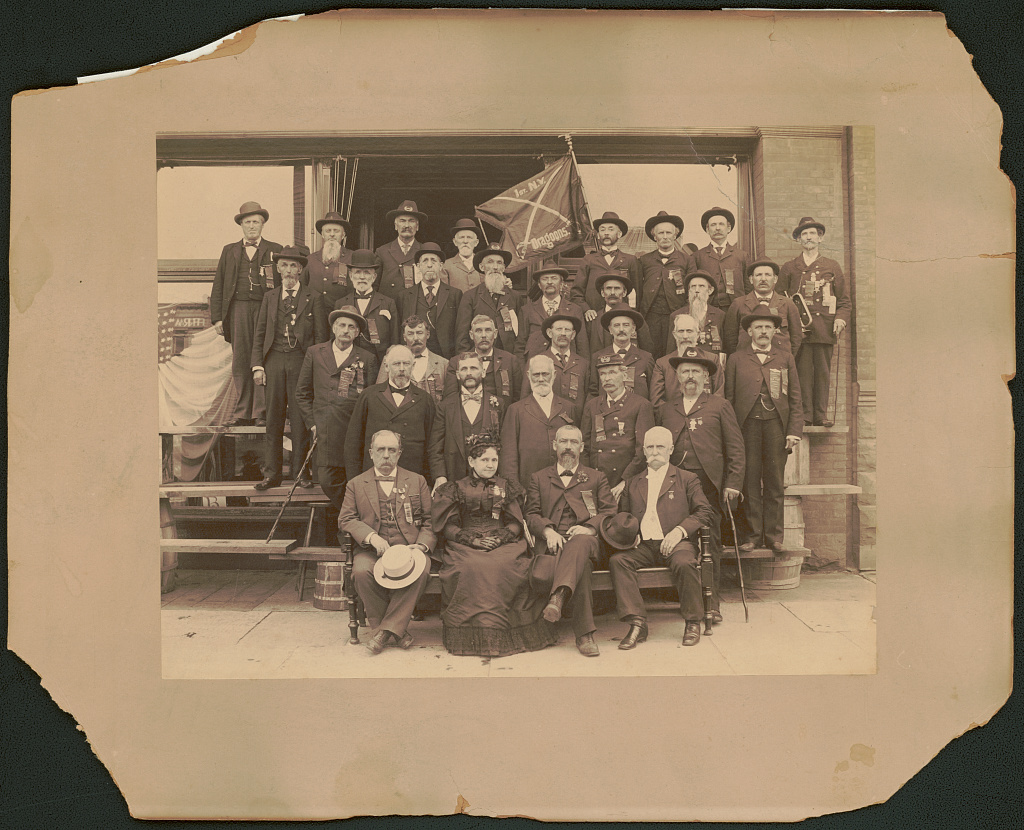 Daniel Griffis enlisted in the 130th infantry regiment of New York in August 1862 in Stillwater, New York. This regiment had the distinction of being the only Union army volunteer regiment which was converted entirely from infantry to cavalry during the Civil War.  It was ultimately renamed the First Regiment of Dragoons. [1] The term dragoon generally refers to mounted infantry or light calvary. [2]

Soon after enlisting men in August, the 130th New York Volunteer Infantry was mustered into service at Portage County, New York in September 1862. Consisting of ten companies, men were recruited from Allegany, Livingston, and Wyoming counties and placed under the command of Col. Alfred Gibbs. Daniel enlisted in Company “G” which recruited principally from the Stillwater, New York area.

The regiment left New York on September 6, 1862, and arrived in Suffolk, Virginia on September 13 where it was assigned to the 1st Division, VII Corps of the Army of the Potomac. The 130th New York was engaged at the Battle of Deserted House and took part in the Siege of Suffolk in April and May 1863. [3]

The regiment was converted to cavalry on July 28, 1863, and designated as the 19th Regiment New York Volunteer Cavalry. The 19th Cavalry was officially re-designated as the 1st Regiment New York Dragoons on September 10, 1863. The 130th New York had the distinction of being the only Union army volunteer regiment which was converted entirely from infantry to cavalry during the Civil War.

“For a short period after our transfer, the regiment was known as the Nineteenth New York Calvary, and our mail matter was so directed. But a more distinctive or special designation was desire. Several names were proposed, but the one suggested by Quartermaster Lawrence, and under which the regiment became famous – “First New York Dragoons” – was adopted, and the same confirmed by the governor of New York.”[4]

It was drilled in its new calvary duties by Col. Gibbs, who belonged to the U.S. cavalry service. James Riley Bowen, who served with the First Dragoons, provided a colorful recollection of the troop’s transition training from infantry duties to being a mounted calvary regiment.

“After a day or two spent in getting settled in camp establishing picket lines, the work of drilling in calvary tactics began. Colonel Gibbs was now in his element. … His twenty years of service as a calvary officer had eminently fitted him for the work he so enthusiastically and successfully carried forward. …We had not only to familiarize ourselves with the various evolutions performed on foot, or dismounted, but were expected to become even more profivcient in all the maneuverings required of ‘the trooper mounted’. … We were thoroughly trained in all that pertained to the use and management of our horses. Most of us had a lingering idea that we knew about all necessary to be known on the subject; but all who had plumed themselves on the possession of such knowledge, soon had conceit taken out of them. … Our country manner of guiding a horse was to use both hands, but we were taught to hold the bridle reins and guide the animal entirely with the left hand. … Another lesson we learned was that never, under any circumstances, were we to control the horse by speaking to him; this must be done by bit and spur. … If the colonel heard anything of the kind, he would savagely yell at the culprit, ‘ Here, you old market woman, stop that’. … The elbow floppers were dubbed ‘pump handle lubbers’. … no monkeyism was tolerated. … Even a man who thought it cute to ride side-saddle style, had all such notions dispelled by a night in the guardhouse.” [5]

The Dragoons were an auxiliary arm supporting the Infantry. While they were not expected to make long marches on foot, it was necessary at times for them to hold a position dismounted, until the Infantry could arrive to secure the ground. While cavalry regiments did most of their fighting on horseback, dragoons, on the other hand, did most of their fighting dismounted. The horses provided them with mobility but for the most part they dismounted when they went into action, using their carbines or musketoons. However, they were armed with sabers and thus were trained to fight both mounted and dismounted. When dismounted, one soldier was responsible for securing four horses during battle, allowing three dismounted infantrymen to engage the enemy with an assortment of rifles. [6]

As a regiment of dragoons, it made its first fight near Manassas Junction in Oct., 1863, sustaining a loss of 10 killed, wounded and missing.

Originally assigned to the Cavalry Corps, Army of the Potomac, the Dragoons moved to the Army of the Shenandoah with General Philip Sheridan.

The regiment moved on Grant’s campaign of 1864 with about 400 carbines and fought in the Wilderness (at Todd’s tavern), dismounted, sustaining a loss of 20 killed, 36 wounded and 35 missing, the heaviest loss of any cavalry regiment in any one action during the war. The Dragoons also took part with losses in General Sheridan’s raid to the James River, Virginia in May, 1864. At Cold Harbor the Dragoons were aroused from their sleep on the ground and ordered into the breastworks, which they defended throughout night, inspired by the music of their brass band. (See quote below. ) Their losses at Cold Harbor were 35 killed, wounded and missing.

“In the early morning of June 1, 1864, we were lying behind the slender barricade at Cold Harbor when three lines of rebel infantry marched toward our front. … Turning to me (the colonel) said, ‘Sergeant, give us some music.’ We at once struck up ‘Yankee Doodle’. After the first repulse… we gave them ‘Dixie’; and when they advanced the second time, gave them ‘Hail Columbia’ on our horns, while the boys put in the variations with their carbines, smashing their ranks worse then before. When they fell back this time, we played, ‘When Johnny Comes Marching Home Again’. Not satisfied with what they received, the plucky rebs tried it again, we furnishing them with, ‘Red, White, and Blue’, as they came up, and with ‘Girl I Left Behind Me’, as the went back, satisfied not to come again. Some of the Sixth Corps boys came up to see the fight, and were astonished to hear a band playing on the battle line.” – Sergeant Walter H. Jackson, in charge of the regimental band. [7]

Reduced in numbers, the Dragoons moved with Sheridan on the raid to Trevilian Station, where they were heavily engaged, their casualties in that action amounting to 16 killed, 61 wounded, and 8 missing. The regiment fought with Sheridan in the Shenandoah Valley and shared victories of the final Appomattox campaign. The Dragoons gained a high reputation among brigade and division generals for their discipline and efficiency.

Under command of Col. Thorp, it was mustered out and discharged on June 30, 1865, at Cloud’s Mills, Va., having participated in about 65 battles and skirmishes. It lost 4 officers and 127 men killed and mortally wounded; 1 officer and 142 men by disease, accident, in prison, a total of 274 . Its loss in killed and mortally wounded was exceeded by only five cavalry regiments in the Union service.

Based on correspondence among the veterans of the regiment, it is interesting to note a perception of prejudice and discrimination between volunteer regiments and ‘regular’ regiments. United States Volunteers also known as U.S. Volunteers, U.S. Volunteer Army, or other variations of these, were military volunteers called upon during wartime to assist the United States Army but who were separate from both the Regular Army and the militia. The Volunteer regiments did not exist in times of peace. Under the United States Constitution, each state recruited, trained, equipped, and maintained a state militia, with regimental officers appointed and promoted by state governors and not kept in federal service for more than nine months. The U.S. Volunteers were enlisted for terms of one to three years, and between 1794 and 1902. [8]

“As predicted in my letter of the 21st, some of the New York papers contain glowing accounts of their (the regular’s) valor at Trevilian: how the First, Second, and Fifth United States Calvary of the reserve brigade ‘charged over the crest like a whirlwind, sweeping all before them, exciting a gallantry that won the applause even of the enemy’. The above may be true of the volunteer regiments so unfortunate as to be brigaded with them, but so far as the three regular regiments are concerned it is all bosh. Colonel Gibbs says that this unfairness comes from the fact that the regulars have with them a professional New York correspondent, who gives them credit for all the fighting of the brigade. Besides this, regulars always have a feeling of antipathy, or disdain, for the volunteers, and prove every opportunity to treat them with contempt. I have heard it remarked that they hate volunteers worse then they do the rebs.” [9]

Daniel Griffis participated in some form in various engagements listed below. At a point not known in his military service he became a wagon master. Available documentation indicates he was a wagon master in January or February 1864. Perhaps when the regiment was drilled in its new calvary duties in Manassas in October 1863 he assumed wagon master duties. Based on the list of major engagements, Daniel was involved with 34 regiment engagements. Early in the morning of August 13, 1864, Daniel and approximately 200 other soldiers were captured by the Confederate guerrilla regiment led by Colonel Mosby. Daniel was part of a reserve brigade wagon train that was captured by Mosby’s regiment (See below).

Regimental History of the First New York Dragoons with a List of Names, Post-Office Address, Casualties of Officers and Men, and Number of Prisoners, Trophies, etc. Captured, From Organization to Muster-Out, Washington, DC: Gibson Brothers, 1865

[7] Recollections documented in James Riley Bowen, Regimental History of the First New York Dragoons During Three Years of Active Service in the Great Civil War, Published by the author, 1910, Page 181

Also, Page 119: “The organization and equipment of a brass band occurred that winter [1863] … they repeatedly served a most excellent purpose on the battle line.”