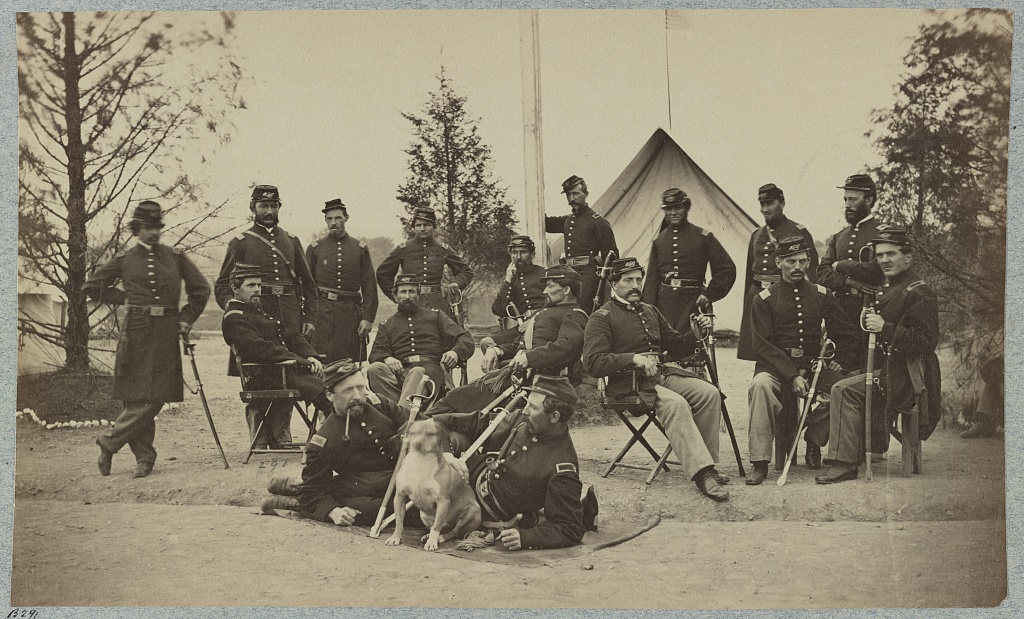 William J. Griffis enlisted, August 28, 1862, at Johnstown, New York to serve three years with the 153rd New York Volunteers. He mustered in as a private, in Company A, on August 29, 1862. He was quickly promoted to corporal on October 17, 1862. William was promoted to third sergeant on June 10, 1864 and again promoted before the regiment mustered out to first sergeant on September 1, 1865.

The regiment spent most of its time performing police and guard duty in the Washington, D.C. area, from October 1862 through January 1864. The regiment was first stationed at Alexandria, Virginia as provost guard and then was deployed as provost guards in the District of Columbia. In the second half of its tour of duty the regiment was transferred to the Department of the Gulf and took part in the Red River campaign and then returned to the Washington, DC area to assist in protecting the capital. The regiment participated in Sheridan’s Shenandoah Valley Campaign August 1864 through November 1864. [1]

The 153rd New York Infantry Regiment was recruited in the counties of Fulton, Montgomery, Saratoga, Clinton, Essex and Warren.  It was organized at Fonda and there mustered into the U. S. service on Oct. 17, 1862, for three years. The companies were recruited principally: at Johnstown (Company A); at Mohawk, Palatine and Root (Company B); at Glen, Florida, Root and Charleston (Company C); at Johnstown and Mayfield (Company D); at Minden and St. Johnsville (Company E); at Ephratah, Canajoharie, Oppenheim, Clifton Park and Lassellsville (Company F); at Mooers, Altona, Essex and Plattsburg (Company G); at Greenfield, Milton, Gal-way, Clifton Park, Ballston Spa, Moreau, Root and Wilson (Company H); at Champlain, Chesterfield, Plattsburg and AuSable (Company I); and at Queensbury, Ellenburg, Altona and Mooers (Company K). [4]

In July, 1864, the regiment returned to Virginia with the 1st and 2nd divisions. On its arrival at Washington it was ordered into Maryland to confront confederate General Early. The regiment then served with General Sheridan in the Shenandoah Valley until April, 1865, when it moved with Dwight’s division to Washington, where it participated in the grand review in May. In July, members fo the regiment sailed for Savannah, Georgia. While stationed there the regiment “won the esteem and respect of the citizens by the gentlemanly conduct of its officers and men”. Colonel Davis was brevetted brigadier-general for meritorious service.

The regiment was mustered out at Savannah on Oct. 2, 1865, under command of Lieutenant Colonel McLaughlin. The regiment lost during its three year service 1 officer and 40 men who were killed or died of wounds; 1 officer and 160 men died of disease and other causes. The total deaths were 202.

The following is a newspaper article from Albany, New York that indicates that less than half of the regiment mustered out with the company in Savannah, Georgia.

Rosters Of The New York Infantry Regiments During The Civil War. Rosters were compiled by the New York State Adjutant General Office. They were published as a set of 43 volumes between 1893 and 1905. Their official titles are Annual Report of the Adjutant-General of the State of New York for the Year … : Registers of the [units numbers]. These should not be confused with the regular reports put out by the New York Adjutant General during the same period.

“Mrs. Joseph Strain from Albany presented this silk swallowtail flank marker to the regiment in November of 1862. The 153rd Regiment carried the flag during the Red River Expedition and in the battle at Sabine Cross Roads, Pleasant Hill, Marksville, Cane River Crossing, and Alexandria, Louisiana. The flag is made of a single piece of silk cut away at the fly edge to create the swallowtail and includes three silk tie-backs for attachment to the staff. The red painted “153” appears on both sides.”