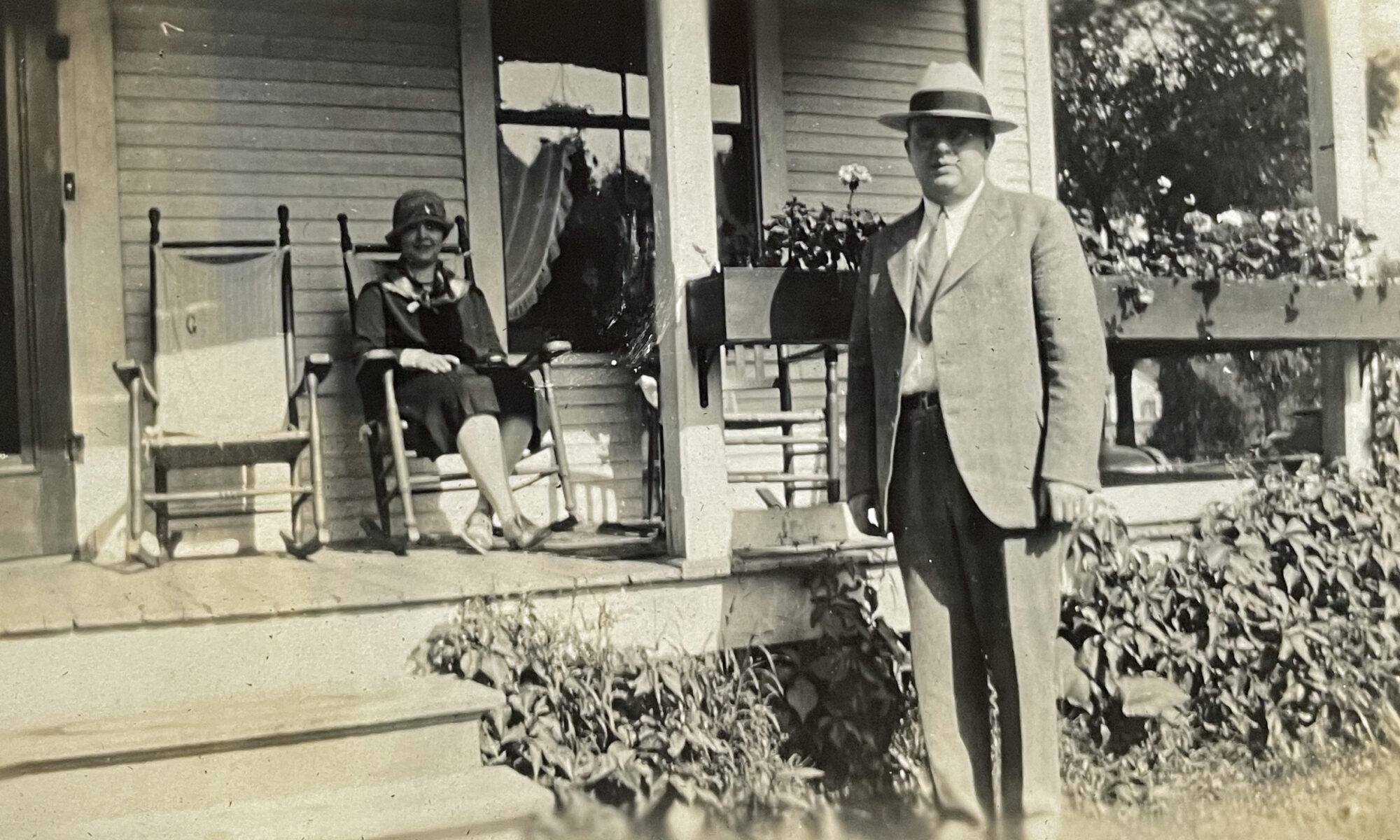 Evelyn Dutcher Griffis married Harold Griffis the year after he graduated from college. Evelyn graduated from teachers college a year before Harold. While Harold was a senior at Wesleyan University, Evelyn taught Latin at the Johnstown, New York High School for two years. According to oral history, Mary Jane (Platts) Dutcher advised her daughter Evelyn to work two years before getting married. She wanted Evelyn to demonstrate her ability to be independent, something Mary Jane felt she did not have.

Once Harold graduated, Evelyn followed the career of Harold Griffis and assumed the various roles and duties associated with being a minister’s wife. As a pastor’s wife she assumed leading roles in various church committees, facilitated fund raising drives, participated in church plays, and organized church events. Evelyn also assumed leadership roles on various Methodist district oversight church committees at the local and district levels of the church organization. [1]

In Amsterdam I headed a group of 100 young people and entertained notable speakers for one monthly forums such as Ralph Sockman [2], Bishop McConnell [3] .  In 5th Avenue and State Street there were were many workers but few willing to be chairmen and for the first time I chaired many dinners and worked in the kitchen.

During Harold’s assignment as a Pastor in Troy, New York in the 1930’s, Evelyn and Harold started a family with the birth of three sons: James Dutcher Griffis, John Harold Griffis, and David Griffis.

In Troy we were told that we would surely have a family, for all their ministers but one had had children after moving there.  After four years there we had three boys.

At the end of Harold’s tenure at the First Methodist Church and the East Main M.E. Church in Amsterdam, and prior to their move back to Troy when Harold became a district Superintendent, Evelyn had her fourth child, Nancy Evelyn Griffis in March 1946.

Evelyn resumed her teaching career, teaching Latin at a girls school, after Harold Griffis died in 1962.

After Harold died, I went back to teaching latin in St. Agnes Episcopal Girl’s school and taught 10 years.  In Amsterdam and Troy I often substituted in the public schools.

Perceptions on Being a Minister’s Wife

Evelyn wrote an undated letter detailing Harold’s career and, by implication, their life experiences for ancestry documentation for her Dutcher side of the family.

I enjoyed very much being the wife of a Methodist minister. Never did I feel imposed upon. There was never a dull moment. In Jonesville I conducted choir rehearsal every Sat night – playing each part as the choir members could not read music. Every year for fifty years the church served a clam bake for 250-300 people on Labor day. The men washed 18,000 clams. We had an assembly line that took care of a number of chickens. A man stabbed the chicken. I, a bride, was given a hatchet to chop off its head, it was plunged in boiling water, feathers removed, cut up, tied on cheese cloth, ready for the bake. Another bride and I were assigned to make cottage cheese. Two huge milk cans of sour cheese were left on our side porch. [4]

The letter provides an historical narrative of Harold and Evelyns’ lives from Gloversville through their stops in Jonesville, New York; Williamstown, Massachusetts; Troy, New York; Amsterdam, New York; back to Troy; and finally to Albany, New York.

Evelyn completes the letter by stating:

It was important to us that our children should find love and respect in our family and each one develop to best of his or her ability. Each assumed a share in the daily work and regarded each day as a challenge to do one’s best.

The Early Years at Groom’s and Jonesville Churches New York

Evelyn Griffis 1925 sitting on the steps of her parent’s house, during Harold’s first pastoral assignment to Groom’s Church and Jonesville Church, New York.

Evelyn on the door step of the Williamstown M.E. Church parsonage with a puppy. ‘Mildred’, referenced in the scrapbook is in the background. The photograph was taken in 1928,.

Troy, New York: The Start of a Family

Harold’s career as a pastor and Evelyn’s involvement in church activities and district church assignments gained momentum with their move to Troy, New in 1930..

A newspaper article on the results of administrative actions associated with the Methodist Troy Council.

Evelyn Griffis was elected first Vice President of the Minister’s Wives Association. In addition, Harold Griffis was accorded the status of an accredited teacher of “Study of the Pupil”

During Harold’s assignments as pastor at the Troy at Trinity Methodist M.E. church, Harold and Evelyn started their family. James Dutcher Griffis was born February 21, 1932, followed by John Harold Griffis on July 4, 1933, and David Griffis was born December 28, 1936.

The following photographs are from one of Evelyn’s personal scrapbooks and capture the growing family in 1933.

Young James with Evelyn Griffis, possibly in the summer of 1933 in Troy New York.

The following two photographs are of Evelyn and the second addition to the family, John Harold Griffis in 1933.

The following photographs were taken in the summer of 1933 at Evelyn’s parent’s house in Gloversville, New York.

A photograph in the winter of 1933 of Evelyn holding John and James sitting on the doorstep.

In December 1936 , three days after Christmas, David Griffis was born in Troy. The following is a photograph of Evelyn with her three sons taken in the beginning of 1934.

When Evelyn and Harold moved to Amsterdam, Evelyn was taking care of three boys. The first year in Amsterdam was tumultuous. Her third son David Griffis contracted chicken pox and died (see A Short Precious Life). Despite this profound loss, Evelyn continued to pour her energies into church activities and raising her two older sons. At the end of their stay in Amsterdam, her fourth child, Nancy Griffis, was born.

The following photograph was taken in July 1938. James D. Griffis and John H. Griffis with their younger brother David Griffis.

Another photograph taken in the summer of 1938 was always on a bedroom bureau of Evelyn’s, which captures a fun moment with her three boys at a local swimming location.

Sons James sand John are in the following photograph in front of First Methodist Episcopal Church in Amsterdam.

Along with Harold, Evelyn was involved with the Epworth League. She often participated in various Epworth league and church sponsored plays. As her daughter Nancy Griffis recalled, Evelyn envisioned her alternative, desired profession as a ‘thespian’.

As reflected in the following undated newspaper article in the 1940’s, Evelyn was involved various roles in church play activities: programming, casting, and play reading.

In 1946, Nancy Griffis was born. the photograph below was taken in 1947 while the family lived in Amsterdam.

The Post War Years Years in Troy and Albany

Evelyn continued playing many roles within the church and managing the family.

Evelyn Griffis was one of the planners for a retreat of methodists minister wives in the Troy Conference.

Harold, Evelyn and daughter Nancy attending dinner meeting of the members of the cabinet of the Troy Conference

Evelyn Griffis as a Teacher

As indicated, Evelyn Griffis started her career as a teacher after graduating from the New York State College for Teachers in Albany, New York. She taught Latin for two years at Johnstown High School, New York. She also was a substitute teacher in Troy and Amsterdam, New York in the 1930’s and 1940’s.

The following is Evelyn’s college transcript and the college Board of Recommendations. In addition there are two letters of recommendation that Evelyn probably used in her continued pursuit of teaching.

Featured story photograph: Harold in front of and Evelyn on the porch of the Williamstown church parsonage on Main Street, Williamstown, Massachusetts. Source: personal scrapbook of Evelyn Griffis, click for larger view.

[2] Ralph Sockman was was the senior pastor of Christ Church, New York city. He gained considerable prominence in the U.S. as the featured speaker on the weekly NBC radio program, National Radio Pulpit, which aired from 1928 to 1962, and as a writer of several best-selling books on the Christian life. See: Ralph Sockman , Wikipedia, page accessed July 28, 2021.

[3] Francis John McConnell was an American social reformer and a bishop in the Methodist Episcopal Church, elected in 1912. Born on August 18, 1871, in Trinway, Ohio, he died on August 18, 1953, in Lucasville, Ohio. McConnell was a graduate of the Ohio Wesleyan University and the Boston University School of Theology. See Francis John McConnell, Wikipedia, page accessed July 28, 2021.

[4] I have excluded three pages from the complete letter for reasons of privacy. These pages provide historical detail on individuals currently living.