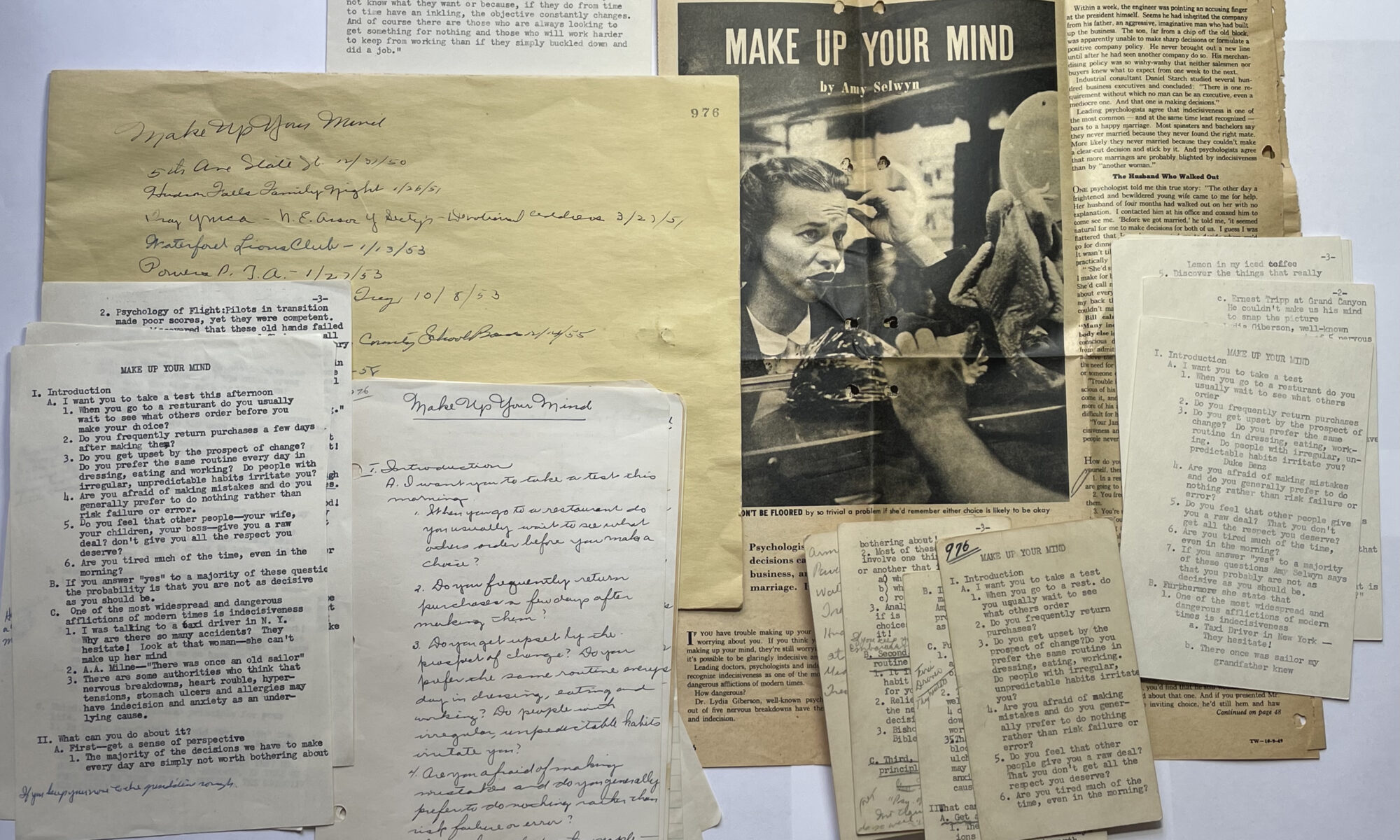 Harold William Griffis’ long career as a pastor, minister and preacher resulted in an accumulation of an extensive catalog of sermons over 36 years. Unfortunately only a small number of his sermons remain from his library. Most of his sermons were given to a young preacher who was starting his career when Harold passed away on June 30, 1961, the day after his 58th birthday. Evelyn Griffis, Harold’s wife, graciously allowed the young man to comb through his sermons and choose those he wished to keep. The remnants of his sermon files contain 45 sermons. [1]

What is immediately apparent when looking at his sermon files is their twin nature as visual objects and as written documents and notes. Viewing these files as visual objects while at the same time reading his sermon notes for sound and sense, one needs to seize upon the twin beauty of their form and substance. They are points of contact by touch, sight, and thought. [2]

As visual objects they provide a glimpse of how Harold Griffis compiled and managed his sermons on a wide array of paper, different formats and print. They also unintentionally provide an artistic side of his ritual of composing this thoughts on various different paper and through different means of putting ink to paper. His sermons attest to the considerable care he gave to the ritual of composing sermons. Similar to Emily Dickinson’s envelope writings, I think Harold’s sermons should be understood as visual productions. [3]

Each sermon is contained in an eight by eleven envelope. The sermons are handwritten or typewritten. They appear on different types of paper:

Occasionally the files also contain copies of newspaper or magazine clippings that originally inspired a sermon. Some of the notes in the files are written in shorthand, a nearly extinct method of writing by means of abbreviations and symbols that were used especially for taking dictation. The hand written notes provide a glimpse of his handwriting and penmanship. The typewritten notes and outlines are especially interesting to view. There were no corrective ribbons on the typewriters that Harold used for typing his sermons. His focus on typing single spaced notes on paper as small as 6 3/4 by 3 3/4 note paper is noteworthy, an art form of its own kind..

One of his most common approaches to organizing his thoughts and subject matter for sermons, talks, and speeches was the use of his portable typewriter. Many of his notes are single spaced, type-written epistles on various sizes of notepaper.

One of the typewriters that Harold used was the portable 1948 Royal Quiet DeLux. It is the last known typewriter that he had in his possession.  It is still in fairly good condition and is housed in a traveling case.

As written documents, the sermon files illustrate how his sermons evolved as creative contemporary parables: based on scripture, contemporary news stories, or personal observations of human nature. Many of the files contain two or three sets or iterations of a sermon. These various versions of sermons are hand written, typewritten and in outline form. They were always a work in process. He may also have replicated the outlines of a sermon in appreviated format, perhaps as refresher notes when he gave a sermon.

Each sermon file is contained in an 8 inch by 11 inch envelope. A sermon file number is marked on the upper right hand corner of the envelope. The logic of the numbering system is not known. It appears that the sermons are numbered in a chronological order based on their creation.

The first sermon file is number 0008. It was first delivered at the Freemont Church in August 1922 when Harold was still in college. The last file is number 1242. This sermon was given three months before his death on March 5, 1961 at Trinity Church in Albany, New York.

For example, below is a newspaper article on his sermon ‘Slaves on Horseback‘ (sermon file 0171 below) which was given at the Williamstown High School Baccalaureate service for graduates on June 16, 1929.

Another high school graduation address was given to graduates of a technical high school.

An undated newspaper article describes Harold’s sermon on the meaning of Thanksgiving:

Another address, given at a Parent’s Teacher Association meeting in Amsterdam on November 23, 1940, was on the subject of Tolerance.

“We Face Our Social Concerns” a speech provided to the Glens Falls Council of Churches.

In an eulogy for Harold Griffis, it was noted that:

“Many remember his unusual skill in teaching the Bible and personal prayer; but the most thoughtful preparation to which Harold Griffis gave himself was in the field of corporate prayer. This is where so many of his parishioners will remember him at his best”. [4]

The following is an example of Harold’s gift at a Rotary Club meeting during the Christmas holiday season.

Another reference to Harold’s ability to weave “spiritual truths in the cloak of humor”:

A List of the Existing Sermon Files and Their Contents

The following is a list of the remaining sermons of Harold Griffis. Each title is linked to a PDF version of the original material associated with each sermon. The PDF versions are extracts from a book originally published on the life of Harold Griffis as a Methodist minister [5].

Depending on how the PDF files are viewed (on a phone or tablet versus a computer), it may be easier to read certain sermons by saving and downloading a specific PDF file. You can then increase the view of a given PDF page for reading.

[1] The original sermons are part of a Family Archive

[2] The featured image at top of story illustrates the contents of the Harold’s sermon files. The image reflects the file contents of sermon 0976: “Make Up Your Mind“.